The Ugly Business Behind the Bushmeat Trade - Jane Goodall

The Ugly Business Behind the Bushmeat Trade

The most notorious threat facing chimpanzees and other great apes across Africa is the bushmeat trade and it’s pushing already fragile great ape populations to the brink of extinction.

The bushmeat trade refers to the non-traditional hunting of non-game animals for meat. Wild chimpanzees and other forest animals are systematically hunted and sold as meat through markets across Africa and cities across the world. What once was a form of subsistence hunting in rural villages, has now evolved into a commercial trade that has grown in scale over recent decades.

In fact, hunters across Africa and the world have lived off the hunting of wild animals for millennia. What is different about the bushmeat trade is the increased commercialization of the sale of bushmeat as a result of both increased access and demand.

Hunting puts large forest species, such as chimpanzees and elephants, at greater risk of extinction. These species typically have slower population growth rates, which makes them very susceptible to even a moderate rate of population decline.

Though great apes are internationally protected and illegal to hunt, they continue to be frequently hunted. The scale of the bushmeat trade further compounds the negative effects of other threats facing chimpanzees such as logging, the illicit pet trade and disease.

Logging roads carve paths into remote forest areas that allow bushmeat hunters to gain access to areas that were previously much harder to reach and also difficult to transport animal meat from.  The bushmeat trade has largely been able to reach its colossal size as a result of growing logging in African forests. Not only are chimpanzees loosing habitat across Africa, but the same roads that take trees out are the same ones that bring hunters in. 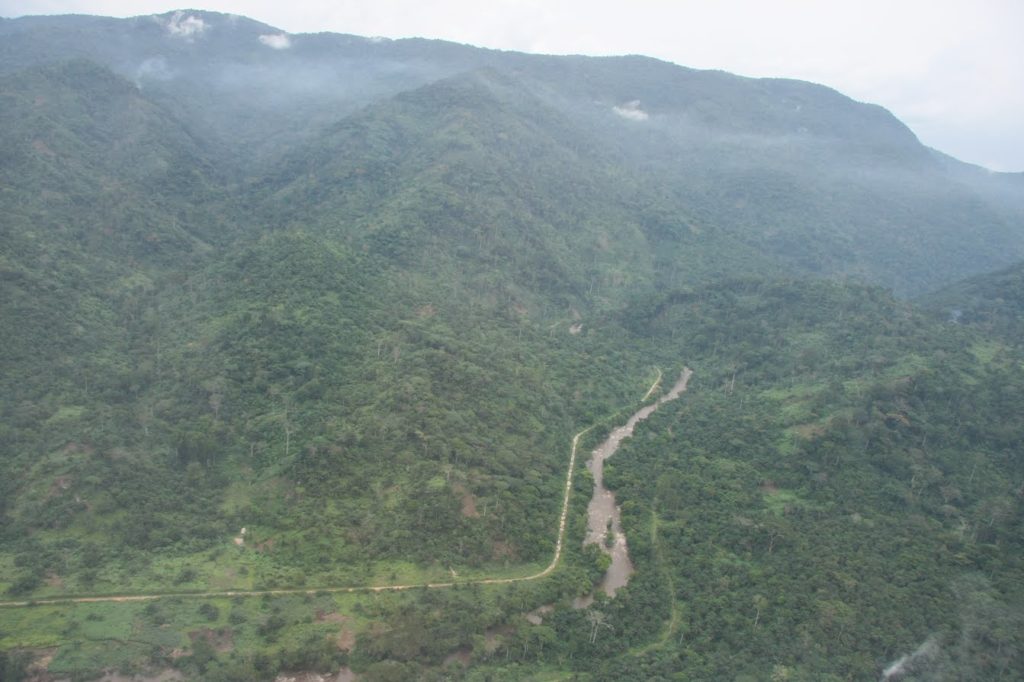 The illicit pet trade and bushmeat hunting also go hand-in-hand. As adult chimpanzees are hunted for meat, infants are captured and sold as pets across Africa and illegal wildlife markets in the Middle East, and parts of Asia and Europe. It is estimated that for every single alive infant that is captured and sold in the pet trade, up to 10 adults are killed in the process and sold as bushmeat. 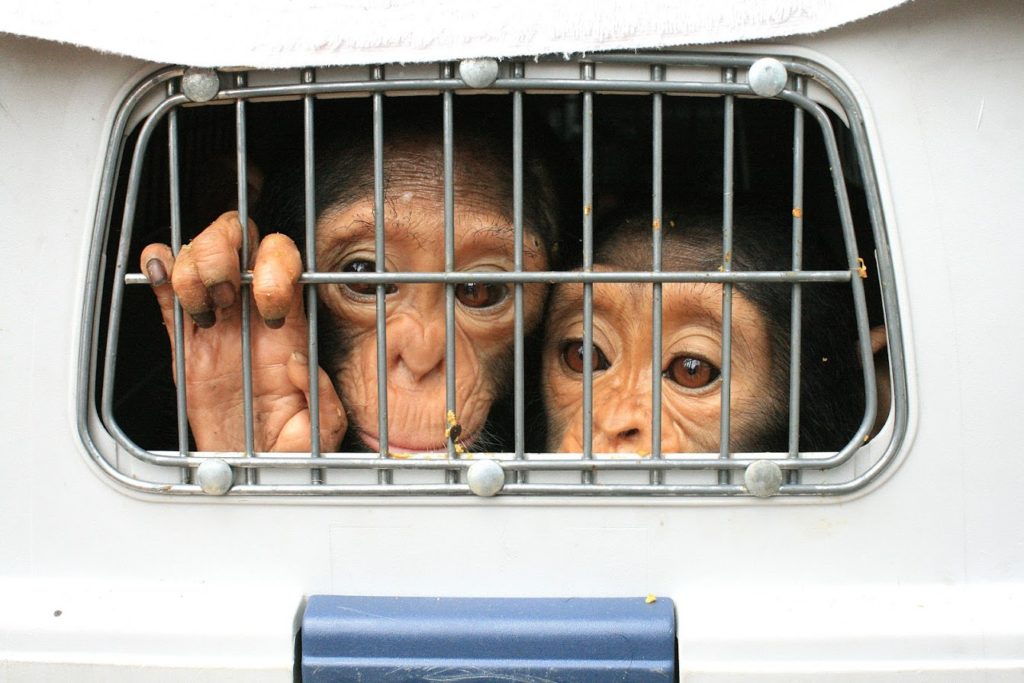 Disease is another growing threat associated with bushmeat hunting with major consequences for human and ecosystem health. Just think back to the recent Ebola outbreak in West Africa in 2014-2015. Over 10,000 people died as a result of bushmeat that was consumed and enable the spread of the deadly zoonotic Ebola virus. This has major human health implications and is cause for global concern as the next Ebola, SARS, or AIDS may be lurking in bushmeat hunted species. 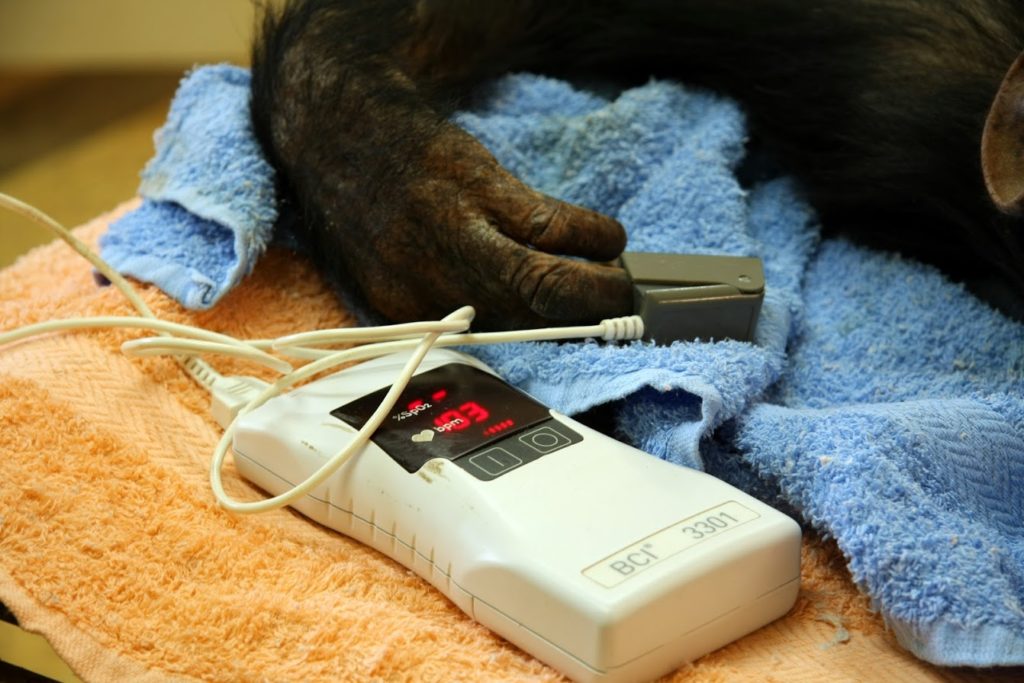 With only 170,000 – 300,000 chimpanzees remaining in the wild, the combined impacts of bushmeat, logging, the pet trade, and disease provide a daunting outlook for their future survival.

With the overwhelming odds facing chimpanzees and as human populations expand and put additional pressure on forest resources, many organizations and individuals have taken up the task of protecting these animals and addressing the bushmeat crisis.

Bushmeat is a complex topic with no easy answers as cultural traditions and the community needs must be understood and respected. Aware of these complexities many conservation organizations have shifted in recent decades to focus on the socio-economic aspects of conservation. This helps ensure success through protecting and sustaining both local wildlife and people. Addressing the human aspect of conservation issues is central to many proposed bushmeat solutions.

The Jane Goodall Institute of Canada has been working with local communities in the Congo Basin to develop sustainable livelihoods that reduce pressure on forests and wildlife.

These projects help address the bushmeat crisis through the development of sustainable incomes and livelihoods, improvements in community health, and raising awareness and knowledge of the importance of biodiversity and sustainability.

Learn more about our efforts to protect chimps and their habitat!

#CycleMyCell: From the Congo to Consumers

The key components used in the manufacturing of phones are imported from developing countries such as the Democratic Republic of Congo (DRC).

Two infants are born on the same day, a few kilometers apart in the Democratic Republic of Congo (DRC).

Our biggest project is Delivering Healthy Futures, aimed at reducing the disturbingly high maternal and infant mortality rates among 20 villages.