Power Struggles: How chimps get to the top - Jane Goodall

Power Struggles: How chimps get to the top

When Jane Goodall was offered the opportunity to go into the forests of Gombe to learn about chimpanzees, little was known about these highly intelligent beings. What Jane learned in the sweltering forest of Tanzania would show the world that chimpanzees, like us, have an incredibly complex social structure. And also like humans, that social structure involves friends, enemies, and battles for power. Dr. Goodall and the Jane Goodall Institute’s continuous research of chimpanzees has revealed so much about our great ape cousin. 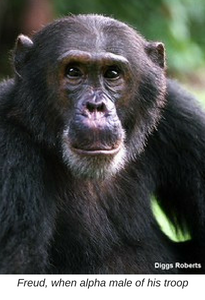 Let’s start at the top: The highest-ranking chimpanzee in a group is the alpha-male. These males climb their way to the top of the chimpanzee hierarchy, and the ways they choose to do so can differ with the personality of the individual leader. Take two of the alpha males observed in Gombe, Frodo and Freud, for instance. Though they were brothers, each chimp had a very different leadership style. While Freud maintained control through fostering strong alliances and grooming those he wanted to keep under his command, Frodo relied heavily on aggression and brute strength. In addition to perks like mating rights, and duties like patrolling territory and breaking up fights, an alpha male always needs to be watching for the next chimp who will try to take his place.

Below the alpha are several other males with whom the alpha may have complicated relationships. The alpha will have friends in his coalition, who helped him gain control and are helping him maintain power. These could be playmates from his juvenile years, brothers, or new friends eager to increase their own social status through friendly contact with the alpha male. However, there also maybe be a chimpanzee or a coalition of chimpanzees who want to overthrow the alpha and install a new chimpanzee in his place. 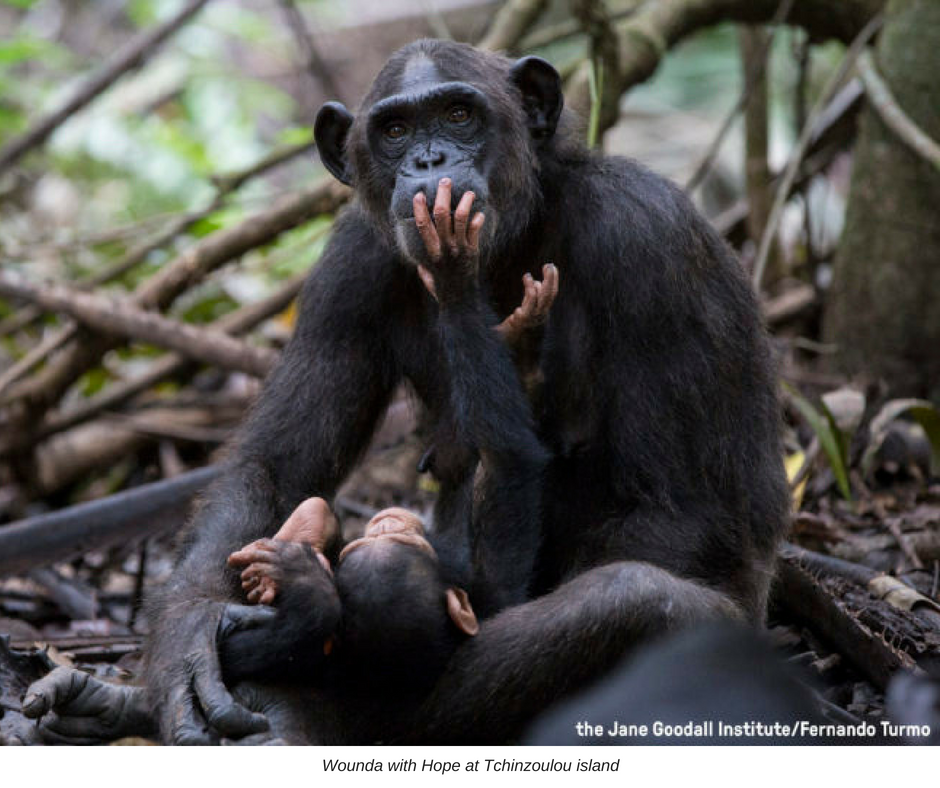 Females also have a hierarchy within chimpanzee groups, led by the alpha female (though overall, an alpha male will almost always outrank an alpha female). The alpha female isn’t as likely to obtain rule through aggression and violence as a male would be, but instead through relationships and personality. This isn’t to say that alpha females are devoid of aggression…they have shown that they sometimes use force when displeased by lower-ranking females. Higher ranking females will generally be more successful in reproducing and gaining access to food sources. Interestingly, the offspring of higher-ranking females tend to achieve a higher status themselves than chimps born to lower-ranking mothers. This may become the case for Wounda’s infant Hope, on the Tchimpounga sanctuary island of Tchindzoulou!

One of the most amazing observations Dr. Goodall made regarding chimpanzee society was the Gombe Chimpanzee War, a four-year-long war between two chimpanzee communities in Gombe. During this conflict, eight adult males from one community killed all six males in another community and gained their territory, only to quickly lose it once faced with another chimpanzee group that was bigger and had more males. Subsequent research has shown that other chimpanzee groups are capable of this type of warfare, often started by conflicts over territory and/or mating rights. Learn more here.

Much of a chimpanzee’s life, especially male chimpanzees, is dedicated to climbing up or being knocked down the chimpanzee social ladder. Those on top need to fight to stay at the top, and those at the bottom need to find a way to improve their lot if they want a chance at fathering offspring and access to the best resources. This, however, is only one component of the complexity of chimpanzee behavior, as they also demonstrate altruism, share resources and knowledge with one another, and build strong friendships.

From Dr. Goodall’s observations at Gombe made decades ago, to research being conducted in the same forests as you read this, we continue to delve ever deeper into the motivations and intricacies of chimpanzee society.