Written By: Brittany Cohen-Brown, JGI US

Gratitude is a complex emotional attribute that is typically thought of as a distinctly human trait. However, after decades of observing great ape behaviour at Gombe National Park in Tanzania (as well as other wild chimpanzee populations), researchers have concluded that chimpanzees also have the ability to feel and display gratitude.

In Gombe, researchers have noted how chimpanzees share food, with results generally supporting the “sharing under pressure” hypothesis. The theory suggests that when chimps “beg” for food, sharing occurs more frequently due to social pressure to respond in a positive manner. Another possible hypothesis is that food sharing takes place because the “possessor relinquishes food in exchange for past or future sharing, or for items of a different currency (e.g. grooming, alliances or copulations).” In other words, hey thanks! 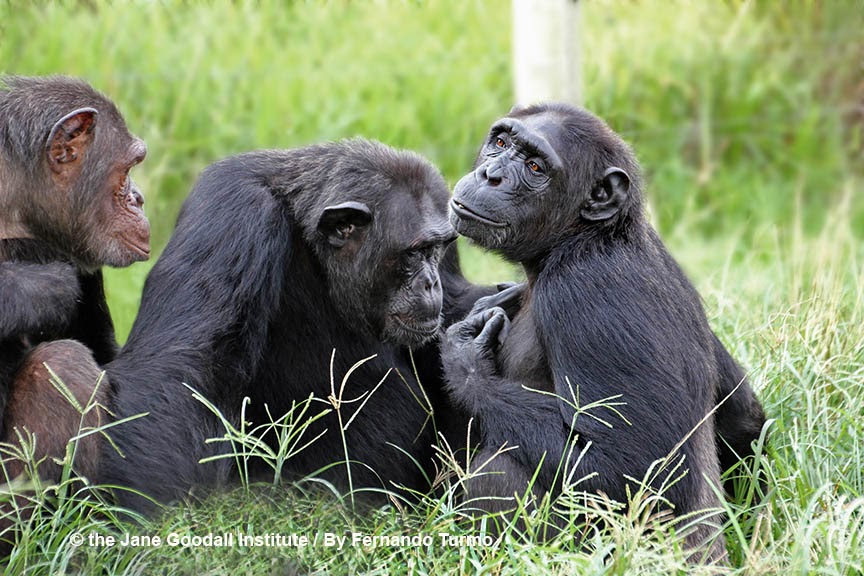 In another recent study of wild chimpanzees, researchers observed chimpanzees responding to being groomed by another chimpanzee. Chimpanzees who have been groomed are often likely to reciprocate by offering a grooming session of their own. This occurs even when the chimpanzee being groomed is of a higher social rank than the other. Is this an example of gratitude? Very possibly – or it may be a literal case of “you scratch my back, I’ll scratch yours” where the groomers are anticipating a future payoff from the other chimp. Either way, this practice provides a fascinating insight on what could be the building blocks for altruism and gratitude, traits that humans and chimpanzees have perhaps inherited from a common ancestor.

A Life Saving Thank You

Dr. Rebeca Atencia, Executive Director of JGI in the Republic of Congo, and Head Veterinarian at Tchimpounga sanctuary experienced a dramatic instance of what could be interpreted as chimpanzee gratitude several years ago.

At the time, Rebeca was treating an injured alpha chimpanzee named Kutu who had been attacked by other chimpanzees in his group. Gesturing to the chimp, Rebeca encouraged Kutu to approach her so she could treat his wounds. After 10 days, Kutu had made a nearly complete recovery. 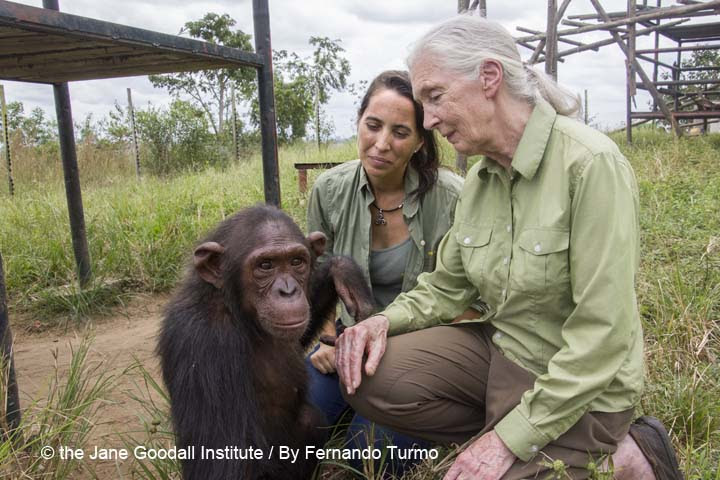 Six months later, Rebeca was examining plants in Tchimpounga’s forest for a study of chimpanzee dietary habits. She began tapping on a tree noted for large, delicious fruit very popular with chimps and other wildlife. By chance, a large male chimpanzee was displaying for females by tapping loudly on trees at the same time. Not realizing this and still facing the tree, Rebeca heard a low guttural chimpanzee call coming from behind her – one of aggression. The large male jumped on Rebeca and the attack quickly opened a serious gash on her head. Bleeding and alone, Rebeca was certain she was going to be killed. Somehow Rebeca managed to escape from the chimp whereupon he summoned his group to hunt – and Rebeca was the target.

When the other chimps arrived, they began to make the call as well until one chimpanzee saw Rebeca and immediately turned to the first male chimp that had attacked her. Rather than joining in the attack on Rebeca, he directed his call at the chimpanzee who had originally called for the hunt. Not only that, he bravely put his body between Rebeca and the original, aggressive, male. When the chimp protecting her turned to face Rebeca, she recognized him straightaway. It was Kutu. This was her signal to run. Without hesitation, Rebeca took the opportunity Kutu gave her and ran as quickly as she could. On that day, she decided to name her first child Kutu, and she did.

Rebeca believes that the incident was an example of the connection she was able to make with this heroic chimpanzee, and the possibilities of our nonverbal connections to other sentient animals. While Rebeca’s experience does not represent a scientific study of chimpanzee’s capacity for gratitude, it is certainly another reminder that there is so much more to learn from our closest living relatives.