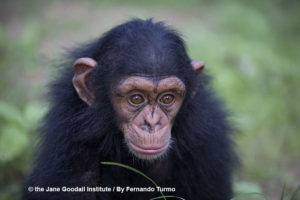 This is the story of George, a very special chimpanzee, and his long journey to his new home. Unfortunately, like thousands of other chimpanzees, George was stolen from his forest home and family for the illegal pet trade. Life for chimpanzees in Angola is horrible; the law protecting chimps from poaching is not sufficiently enforced, and many chimpanzees are stolen from the wild to become “pets” in the homes of illegal private owners. Luckily, when George was taken to a veterinary clinic by one of these illegal owners, he was confiscated and rescued by Dalene Dreyer, a German expat working in Angola.

Dalene took care of George and knew that her next step was to find a rehabilitation center that could take George and provide him with professional care and the social stimulation of other rescued chimpanzees. Dalene, at last, found the Jane Goodall Institute’s Tchimpounga Chimpanzee Rehabilitation Center in the Republic of Congo and knew this was the right place for George. But this decision was a tricky one and would take time and effort to achieve…

Luckily, there is an extensive system of primate sanctuary care and oversight known as PASA, the Pan African Sanctuary Alliance, which helps connect 23 sanctuaries in 13 countries and advises on the placement of rescued animals. Through PASA it is possible to understand where the best placement of rescued primates should be, according to genetic compatibility and environmental accommodations among other factors. Happily for George, PASA determined Tchimpounga would be his new home and they worked with the Angolan and Congolese governments and other entities to get George to the sanctuary. Though this is a highly unusual acceptance to Tchimpounga, it will be one of happiness and growth for George. 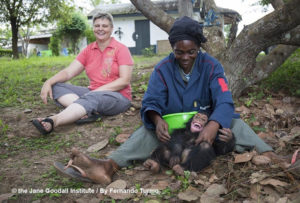 After a long process, permits were obtained for George’s transportation via plane. On November 16, Dalene arrived at the Tchimpounga sanctuary with this amazing little chimp. Dalene stayed to meet some of the Tchimpounga staff, and was quickly convinced of their professionalism and knowledge after Chantal, one of the caretakers, did a small presentation. Though George had been through so much, after a JGI veterinary check-up, it was discovered he was in moderately good health outside of having to be dewormed. Dalene then returned to Angola, knowing George was in great hands and though she would miss George, Tchimpounga is where he belongs. 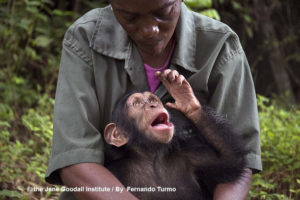 Quickly, Chantal gained the trust of the new baby chimp. Through physical contact and caresses, Chantal has created a significant bond with George. For this chimp, Chantal is now an adoptive mother. Chantal, as a professional caretaker, knows how to interact with George, and gives him ample hugs, plays many games with him and delivers plenty of attention. The next few weeks Chantal is taking care of George exclusively, attempting to heal whatever traumas he has endured. Little by little George will begin to meet other caregivers to avoid being too dependent on Chantal. Together, the caretakers will help George adapt to life in the sanctuary as quickly as possible. When this quarantine period ends, George will be integrated with other chimpanzees of similar ages. Over time, he will gain friends and become an important part of the group. 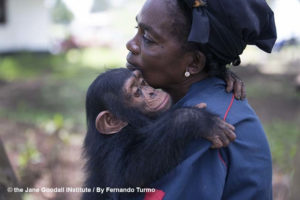 George is a very brave and determined little fellow. Apparently, he is not afraid of anything, although he does prefer to remain close to Chantal. He very much enjoys climbing trees, though as he is still just a baby, the trees this little brave chimp are conquering are only about four meters high. Chantal sometimes scolds George for not returning to her, as his chimp mother in the forest would do. This baby chimpanzee must be aware of the possibility of danger and has to be alert. As such, Chantal trains him constantly, imagining enemies and threats, with vocal noises, looks or gestures. George watches her closely and runs next to Chantal when he thinks the danger is real. This habit will be necessary if George is to interact with other chimps.

Though he certainly puts on a show of bravery, George still suffers from his past. The nights are the worst for George; as he sleeps he trembles and has frequent nightmares likely a result of memories of the day he was torn from his mother’s hands. Sometimes he is shaken from these nightmares and wakes up looking at Chantal. Seeing her calms him down and he begins to sleep again.

George was fortunate that Dalene did everything possible to rescue him and facilitate his transfer to Tchimpounga, but there are many other chimpanzees who, like him, are victims. Tchimpounga is a place where every chimp suffers from their past, but has monumental hope for the present and future!