At the beginning of December 2019, the JGI Congo team was contacted by the Project d’Appui à l’Application de la Loi sur la Faune Sauvage (PALF) about a possible baby chimpanzee needing urgent rescue. It was unclear whether or not the baby chimp was still alive, but a plan was quickly created to investigate the news and determine what the best course of action would be.

While there are wildlife protection laws in the Congo, the implementation of these regulations is often lacking. PALF – a collaborative organization consisting of the Congolese Ministry of Forest Economy and Sustainable Development, the Aspinall Foundation, and the Wildlife Conservation Society ­–investigates the wildlife trade in Congo and works with the police to identify and ensure traffickers are arrested and held accountable. As they work to protect wildlife, PALF also ensures the media is aware of trafficking crimes and their punishments, with the aim of increasing public awareness.

When the PALF team first visited the village of Enyelle, where the chimp had last been seen, they were faced with confusion as the villagers shockingly claimed that the baby chimp had died and had already been cooked and eaten. However, the team did not give up and a few days later were able to determine the chimp was alive and quickly sent a photo to the JGI team.

The infant chimp only weighed 1.75 kg (3.85 lbs), had a fever, and was paralyzed except for her right arm. JGI and PALF needed to work quickly. 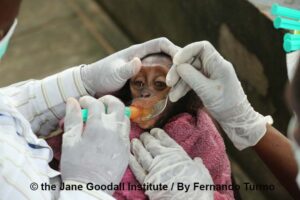 First, the team drove to Impfondo, where nurses from the Tchimpounga sanctuary met them in order to begin treatment and help stabilize the baby chimp for the rest of her travels.

Battling for her life, the small chimp arrived to Tchimpounga on December 24th – a Christmas miracle. The caregivers were in awe when they saw the chimpanzee’s state but acted fast to start a 24/7 treatment routine. When test results came back to show that the baby chimp needed a blood transfusion due to her anemia, swollen legs, and recurrent hypothermia, Dr. Rebeca Atencia travelled to Congo from Spain, and performed the procedure the very next day.

The Tchimpounga team monitored the baby chimp’s every move as she began to recover, keeping her warm with hot water bottles and holding her in their arms. Slowly, the small chimp has regained her strength and is no longer in critical condition. Although she still spends much of her time sleeping, the JGI caregivers are confident she will make a full recovery and flourish in her new home. 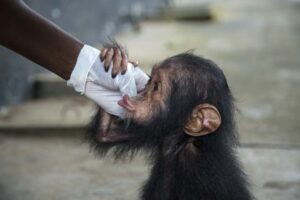 The team decided to name the small chimp Perrine, after the PALF coordinator who helped save her life. The name is fitting for this baby chimp as it means rock in French, perfect for her strong determination for life.

You can help to support the rescue and rehabilitation of other chimpanzees by contributing to the work of the JGI team. Please consider donating so you can help future chimps in need.