Late last year, after many months of planning and paperwork, JGI’s Tchimpounga sanctuary team left the Republic of Congo to rescue two adult chimpanzees from a restaurant in neighbouring Angola. But when they returned two days later, they had an unexpected addition with them – a baby chimpanzee named Tina. 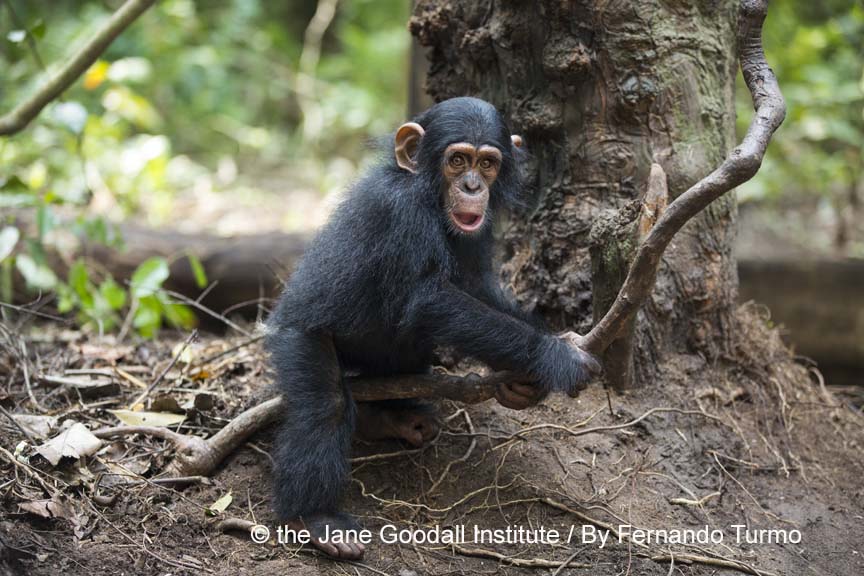 The team found Tina all alone in the back of a pickup truck where she had spent weeks before her rescue. She was covered in lice, had internal parasites, and was wary of human contact. But Tina was strong for her age and within two days of arriving to the sanctuary she was inseparable from Antonette, a JGI caregiver. Antonette stayed with Tina day and night to care for her and make sure she felt safe.

Tina had already been through a lot in her young life, but thanks to Antonette’s love, she slowly learned to trust humans again and gained her confidence back. After two months in quarantine, an exciting day came: the veterinary team gave Tina a clean bill of health, she was ready to meet the other baby chimps.

First up was George. When George was brought in, Tina was very brave and ventured away from the safety of Antonette’s arms to meet him. But while George is very kind-natured, he’s much larger than Tina and likes to play rough. After so much trauma, Tina needed a softer approach. So the caregivers decided to take George back and try introducing Vienna instead. 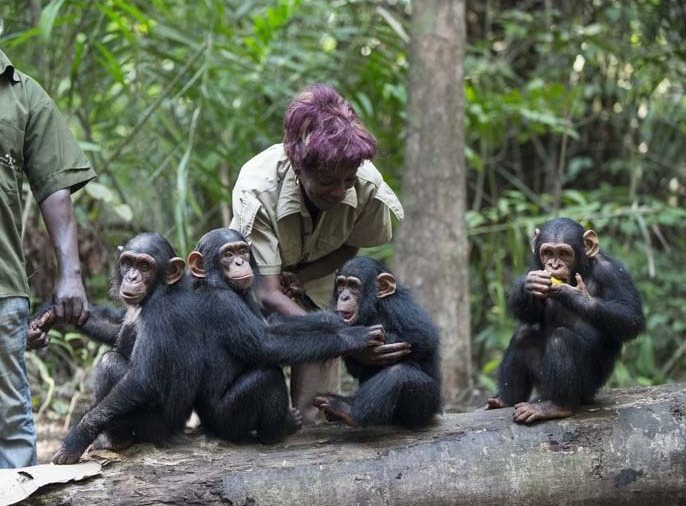 From the moment Vienna met Tina, he was incredibly gentle. At first, Tina was unsure of the hugs Vienna offered her, but within minutes they were following each other around and holding hands. An hour later, the caregivers decided Tina was ready for Kabi to join them. Young and outgoing, Kabi started pushing Tina around, which worried Antonette at first. But soon the two were rolling around in the sand, laughing and ignoring the caregivers’ instructions to take it easy. Several days later, George was welcomed back and the group was complete.

Now, the four young chimps spend their days playing and exploring the forest. Tina is especially attached to Kabi and Vienna, though she still avoids George when he wants to play rough. Each night, Antonette takes Tina away for her evening bottle and sleep. But soon, she’ll be ready to spend her nights with the group and continue to grow into a healthy adult chimp.

If JGI’s team hadn’t found Tina on their rescue mission, she might still be suffering at the hands of humans. Sadly, there are many other young chimps who aren’t so lucky. But you can do something about it – by supporting our work, you’re supporting programs that protect chimps and their habitat.

The Jane Goodall Institute does not endorse handling, interacting or close proximity to chimpanzees or other wildlife. The rescued chimpanzees seen in these photographs are cared for by trained professionals at the Tchimpounga Chimpanzee Rehabilitation Center.