Help care for the orphaned chimpanzees at the Tchimpounga Chimpanzee Rehabilitation Center in the Republic of Congo with a symbolic adoption. 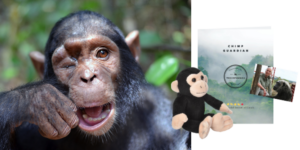 Zeze was just a baby when he was orphaned and injured by a poacher attack. He and his mother were likely being hunted for the illegal bushmeat and pet trade. At such a young age he had already lost so much. Because his first introduction to humans was so traumatizing, Zeze was an anxious chimp when he arrived at JGI’s Tchimpounga Sanctuary.  But his caregivers didn’t give up on him. As Zeze got better, he was introduced to Perrine, another rescued chimp at Tchimpounga, and these two are now inseparable.

Your symbolic adoption of Zeze is a gift of new beginnings to the Tchimpounga chimpanzees, ensuring the Sanctuary will remain a safe haven for years to come.